Cascadeur includes a dedicated tool for monitoring character’s rotation: the Angular Momentum.
Visualization for the rotation can be enabled in the viewing mode settings. 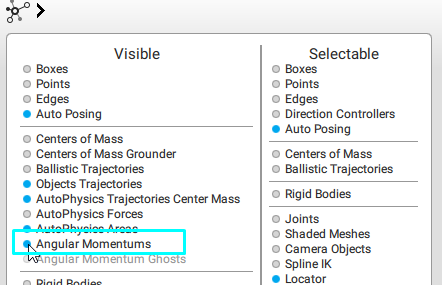 You can also set how the tool should look in the Viewport.

In mid-air, any object rotates only around their center of mass.
During a flight, there is no way to stop the rotation or to change its direction without outside influence.

This means that on ballistic intervals, the Angular Momentum arrow should always retain its length and direction.
This applies not only to objects thrown into the air, but to living creatures as well. You can only change your rotation in mid-air if you push yourself from something.

However, there are certain tricks that can help you turn where you need to without changing the general direction of rotation.
Cats, for example, can turn themselves over as they fall in order to land on their paws. To do this, they go through a succession of specific poses.

In this example, the cat initially doesn’t have any rotation, - the length of the arrow is zero - and no rotation ever appears during the flight, even though the cat’s paws end up on the ground.

When you are working with the AutoPhysics instrument, all the errors in the character’s rotation are fixed automatically, and the physical assistant simply shows this fixed result.
But with a regular Ballistic Trajectory, you can monitor and adjust the rotation using Ballistic Ghosts.

Physically correct positions of the character are shown in red silhouettes. When you snap it to physical ghosts, the character turns in each frame so that his position coincides with the silhouettes. At the same time, the tool does not change the poses set by the animator, but rotates the character entirely around the center of mass!